Joined Dec 2013
Total Posts: 954
It's amazing how much idiocy surrounds this topic, particularly in the media.

Obviously, women are far inferior soccer players. Let's see, whaddya think, could Alex Morgan make an NCAA Division III team? Maybe. So, no one should get in trouble for pointing this out. And shame on anyone for cowering to the Twitter mob when they state a simple, obvious fact.

Obviously #2, follow the money. The women should be paid somewhat proportionately to the revenue they generate (and so should the men).

And I'm with Sepp Blatter on this - their game would be way better if they played in bikinis. Like they really don't use their sexuality any way to drum up interest. I have a daughter now so my interest in USWNT is primarily due to her, but before I had her of course my interest was because there are a few good looking chicks on the team.

Why is everyone so terrified of the Truth? Hey, that would be a good username.


Joined Jul 2012
Total Posts: 937
Every player man or women should be paid a % of the revenue that they generate from games they play in. That would solve the problem of equal pay. There should be a minimum if the stadium is empty and that should also be the same for every player. I don't know why this is such a huge problem.


Joined Oct 2012
Total Posts: 275
Grant it this is just my opinion but the isn't really about equal pay. There are aspects that should be absolutely equal. Playing on grass fields, hotel stays, etc. Lilsmike pointed out the issue in my opinion. The USWNT does not want to give up their pay structure. They want to keep the salaries but also want the bonuses and per game pay rates. In the end that is not equal. USSF completely blew this though with the way they have responded.

I have seen it mentioned but the USMNT players have to make their name known somewhere else and are rewarded with getting called in. USWNT make their name known with the USWNT and are getting jobs in leagues because of it. That's why the stunt with the inside out shirts hiding the USSF but showing the 4 stars was childish. Bite the hand that feeds you scenario.

I am a firm believer that everyone should be paid based on their value to revenue generated. It doesn't matter what sex, race, religion, or any other demographic. I just don't see the USSF being able to win this because of the court of public opinion. If they switch to the same pay structure as the men NWSL will probably die and there will be no development of the USWNT (they always call in the same 20 roughly). If that happens people will blame the USSF for not supporting. If they don't change the pay structure people are still going to yell discrimination.


Joined Jan 2013
Total Posts: 1,759
Well the one thing that has not been mentioned is that the USSF may just give up the fight to save face in order to keep the womens team popular.

It would seem to me that SUM Marketing are not stupid. When the women are not playing, there is little interest in them. This public sympathy keeps them relevant during down time, keeps them being seen as media darlings while Rapinoes foul mouth rants go viral.

I dare say if USSF came out and offered the women exactly the same deal as the men they would reject it. As has been pointed out before, it is in their best interest to salaried workers instead of independent contractors like the men.

But they will have their day in an actual court. While the neanderthalish arguments served up to the populace will be widely reported, the true facts will be put forward before a judge and determined on legal merit, not the public's heartstrings.


Joined Jun 2018
Total Posts: 168
I think the women should look to sue Fifa instead of USSF. Because they determine the bonus pool which is significantly larger for the men. So the men's might become challenged for resources going forward.

And is there any country that pays men and women soccer players equally? Also, if women want equal pay, can the men then lobby for equal treatment, examples same amount of paternity leave, having male journalist in the female locker room? And I am concerned where will USSF, make up the difference in money? I assume they will pass it onto the consumer with ticket and merchandise.

Heres the thing though... a lot of what the women have been saying and arguing has either been based in misinformation, is intentionally deceptive/shrouds actual financial data, or is baseless in nature.

Lets do the math.

As a % of revenue generated:
As a % of total purse:
They can try to sue FIFA, but it comes back to the facts and math of the matter. They lack a true legal case, so have resorted to making public stances and trying to win public opinion and support in order to twist the arm of US Soccer.

The women are actually paid more than their fair share when compared to the men. The only way to make things equal would be to have everything tied to a % of revenue generated... and if that were truly the case, either the men would get paid more or the women would get paid less. Thats the facts.

The women's team is suing USSF seeking $66M in damages... which is quite ridiculous. The harsh truth is that this has less to do with "equality" and more to do with a lot of the members of the women's team seeking a big retirement check.

I could keep going, but won't. As I have stated before, I have gone extremely in depth on this topic, and the facts are not in support of the women. 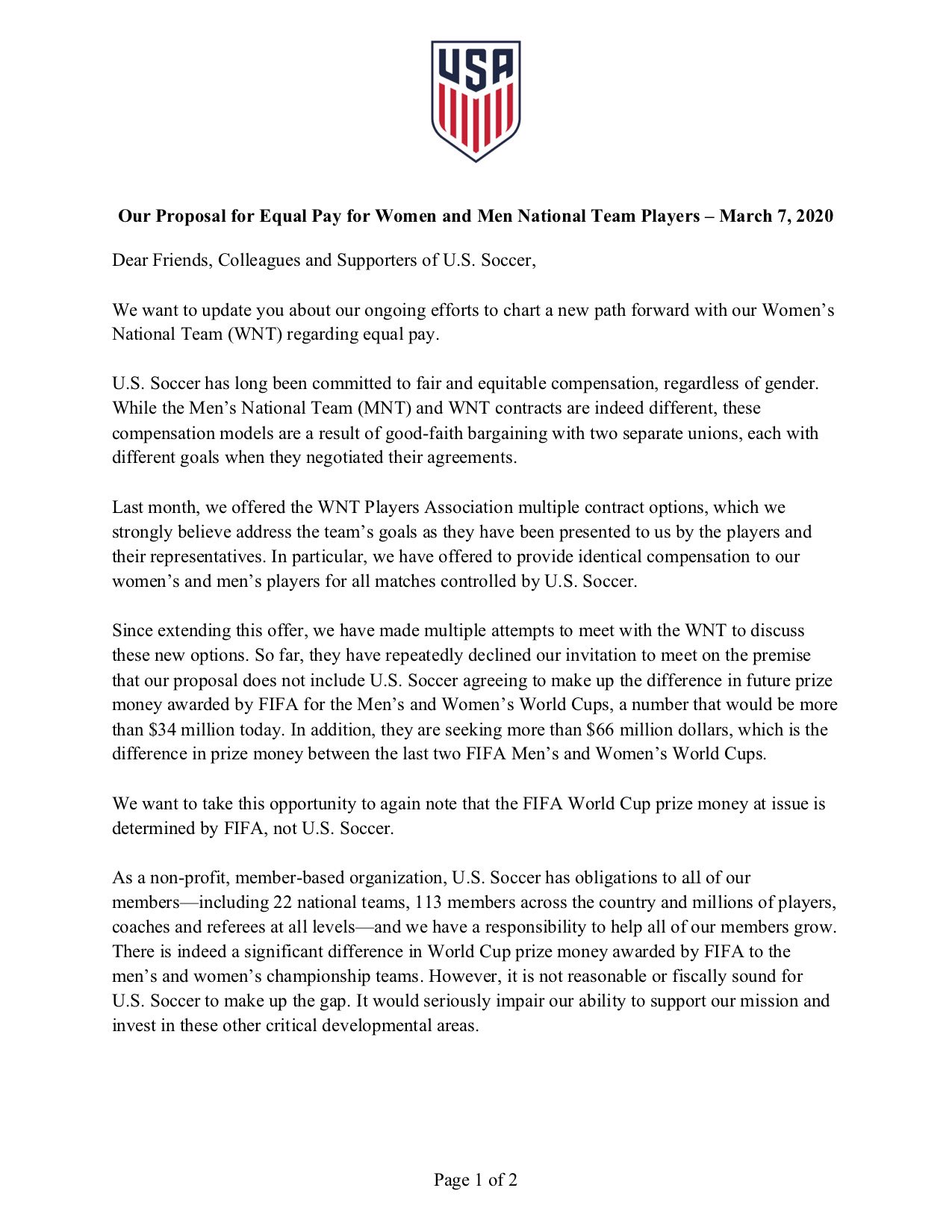 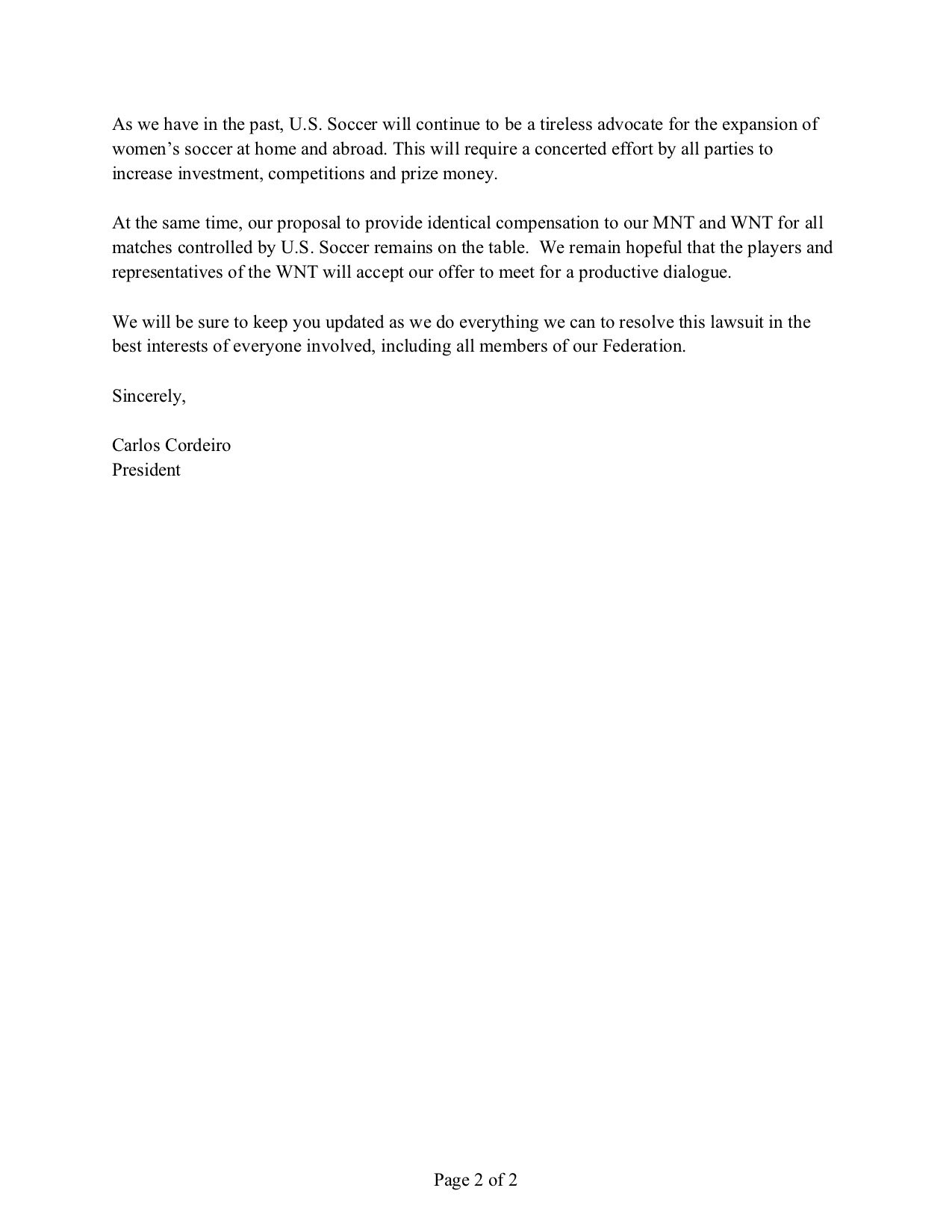 
Joined Oct 2012
Total Posts: 1,350
Bringing it up because I continue to see a lot of chatter on the web about this issue. This is a statement released a while ago from Carlos Cordeiro.

If reporters were reporters and actually did research into the facts at hand, there would be a lot less ignorance on this topic.

As I've stated, this is not about "equality" for the women's team. The last time a male player was paid more than a female player was in 2015, when men's players were receiving their bonuses for playing in the 2014 WC.

Most of it is a publicity stunt aimed at twisting the arm of US Soccer in order to get even more money in their next CBA... as well as a retirement check for the older more established players.

They are suing USSF for $66 million, the difference between what the men's winners and women's winners got from the last couple WCs. The WC prize money from FIFA has nothing to do with US Soccer, and if you do the math as I did in a previous post, the women actually receive more compensation than the men when it relates to a percentage of their revenue generated (which is the only true and "equal" metric that is fair to everyone).

I am all for equal pay... but this is not what this issue is truly about. Don't buy into the headlines and articles and tweets that you see on the internet. 95% of all of them are bogus, one sided, and the authors clearly have not done their research...

RANDOM TAGS FROM PAST WEEK...