I somewhat agree with this part. Law of averages always wins at the end, and if he ends up being consistent with this, good, then we can add him and hope he does well. But there's also the thing with players and their current form. If he's in such good form and we put a guy on the roster who is in bad form, why? Because the guy in bad form has had good form in the past or is a bigger name? I think there are arguments to both sides, but more so and better on the side that wanted him on the roster.

My whole point (in chatting about this on a fan board) is that Ramirez should be there over Morris.
If I'm cherry-picking, so is MSantoine, but at least I have current form on my side of the argument. Morris' play for club and country has been mediocre in recent months. If that's because he's been hurt, he can go recover his form in Seattle and stay out of the 23. Most of the soccer world (and sports world) thinks that current form does matter, from professional coaches on downward, so I'm nipping in the bud any talk that "form is fleeting and class is forever". Bullcrap.
This doesn't mean that quote-unquote "hot-streaks" should be believed in.
But half a season isn't a hot streak.


Joined Jan 2013
Total Posts: 5,448
For how much money ESPN, Fox and NBC spend on soccer, Univision's coverage blows them all away.

No pre-game show on ESPN because they're showing flying robots. Meanwhile, US legend Marcelo Balboa is breaking down Jordan Morris' game over on Univision.


Joined Jan 2013
Total Posts: 5,448
From the guys warming up on Univsion it looks like the lineup will be

I think that's what I saw. Not sure on the second CB as Omar was kicking balls around with the other bench players. I guess its Hedges because Miazga is difficult to miss but I didn't see Hedges. 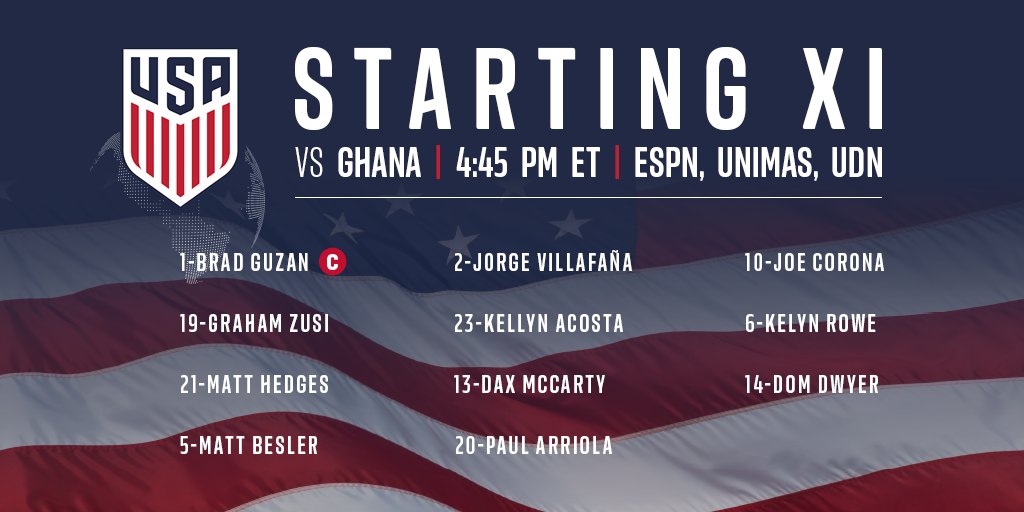 Maybe it is Miazga in the starting lineup. I don't know guys.


Joined Jan 2013
Total Posts: 5,448
I didn't see Hedges running the lines but to be fair we have a lot of white guys with the same haircut in this lineup Besler, Arriola, Rowe, Hedges (not to mention Miazga and heck even Cameron) so it's possible I missed him.

Spotted! They just showed a clear shot of Hedges. He is indeed there.

I am jealous of Mexico's scheduling.

If Bruce wanted to start the lineup his playing tonight against Ghana then we could have played the rest of the guys in a Friendly against Paraguay on Wednesday. It would have been a chance to test guys against a decent opponent.

We could have had a lineup of


Joined Mar 2014
Total Posts: 2,147
I will save my lineup grumbles for:
Zusi - why?
Corona - not an AM with this kind of lineup. Only really specific kinds of guys can have one forward in front of them and get it done.

Dwyer has to do better. Not a great angle but put some pace on the shot.

Major League Soccer » League News and Discussion
MLS IS BACK TOURNAMENT
posted by: EKneezy @ July 10, 2020 3:07am

Campbell, Svay Rieng Back In Action